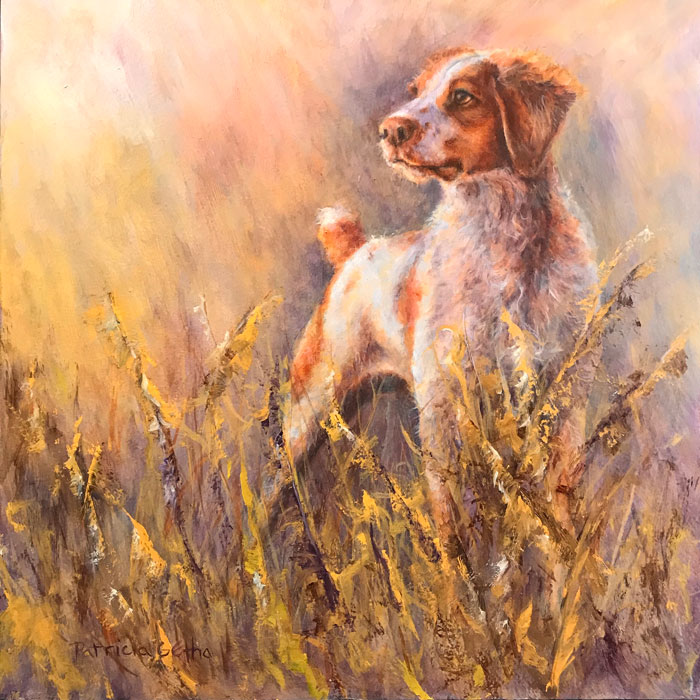 Title: Two in the Bush

The Brittany Spaniel was first recognized by the American Kennel Club in 1934. The breed was developed in France and named after the region where it was bred and raised to be one of the most versatile bird dogs ever. They can work a field for pheasant, woodcock and quail or retrieve ducks from the water.
In 1982 the American Kennel Club shortened the name of the Brittany Spaniel to just Brittany, stating that their hunting style was more like a pointer than a spaniel. However, us old timers still prefer the original French name and its presumably hard to teach an old dog new tricks so to me they will forever be Brittany Spaniels.
Brittany Spaniels often appeared in 17th century portraits, pastoral scenes and tapestries by French, Flemish and Dutch masters suggesting that the liver and white pointing dogs were quite common in Western Europe.
For me personally, it is quite a treat to get in the field with this breed. They are high energy intense dogs that are a blast to photograph and paint. They have so much natural ability that shows even in young pups. I am fortunate to have a friend that breeds, trains and hunts with her Brittany Spaniels.
Menu
Facebook-f Instagram Youtube Twitter
Copyright 2022 © All rights Reserved. Mural Mosaic Inc