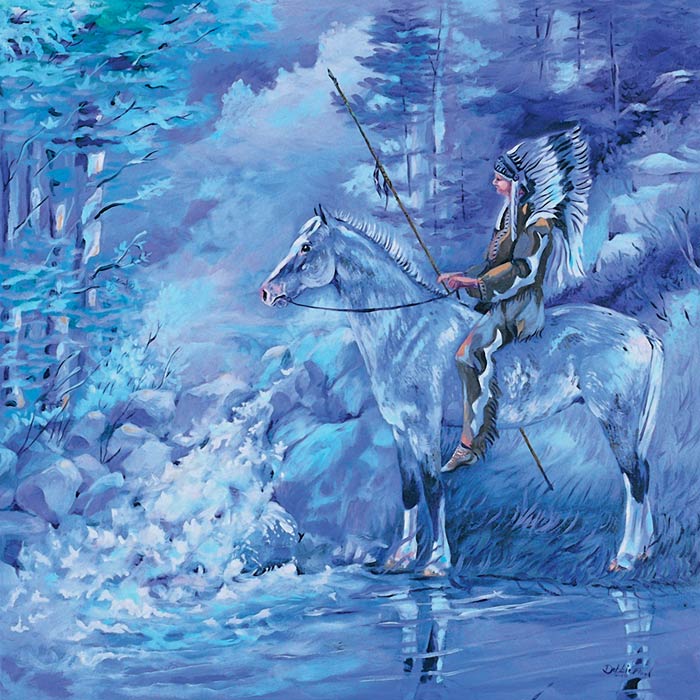 Title: The ride of freedom

Artist Comments: I knew right away, when I received this panel, that I would be painting a portrait of my father on the Appaloosa horse “Snooper’s raindrop” who we raised on our farm. My dad showed him in halter classes and later broke him to ride. When I became a teenager, many, many years ago, Snoopy was my mount and I rode him on many a fun trail ride. I dedicate this panel to my father, Donald Warren, and our special family member, Snooper’s raindrop.

My father is depicted here in a Native American Outfit. Though my family is not descended from the Native Americans, I am rendering this painting this way, because we were all decked out, as it was the Bicentennial year 1975, and we were in our town’s parade. I was dressed up as Davey Crockett riding my pony, Minute Maid, and my mother was a lovely Native American Maiden riding our Palomino mare, Dan’s Fancy Girl. We were quite the sight! I was 13 years old and it seemed really special to be riding in this parade with my parents. Snoopy went along fine, but on our return back, Snoopy stood up on his hind feet. He just went up in a slow motion, kind of stance. We were on top of a hill in the middle of the road, right in front of the Town Church. It was kind of a magical moment for me,to be watching this beautiful and intelligent horse go up like that with my dad aboard him with all that Native costume. I honor the Appaloosa in this panel, for their role in the history of America, for their intelligence and kindness. And I honor my dad in this panel, for his patience, wisdom, and being the greatest dad I have ever known to walk this earth. And I thank him for the life that he provided for his family.
I didn’t render Snoopy in that rearing stance. I am putting him in the natural setting of woods, water, and sky. That is where my dad trained him. And that is where Snoopy was most comfortable and happy. He loved the trail rides. And that is the heritage of the Appaloosa Horse and the NativeAmericans, to walk among the lands.