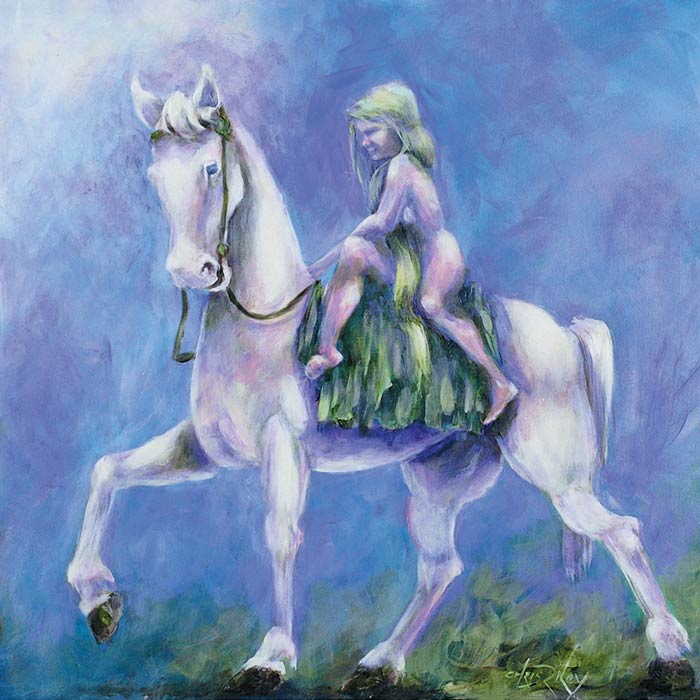 Artist Comments: The countess Godiva, desiring to free the town of Coventry from the heavy servitude of toll, often besought the earl, her husband, with earnest prayers to free the town from the said servitude and other troublesome exactions. The earl upbraided her for vainly seeking something so injurious to him and repeatedly forbade her to approach him again on the subject. Nevertheless, in her feminine pertinacity she exasperated her husband with her unceasing request and extorted from him the following reply: ‘Mount your horse naked’, he said, ‘and ride through the market place of the town, from one side right to the other, while the people are congregated, and when you return you shall claim what you desire’. And the countess answered, ‘And if I will do this, will you give me your permission?’ And he said, ‘I will.’ Then the countess, beloved of God, accompanied by two soldiers, as it is said, mounting her horse naked, loosed her hair from its bands, so veiling the whole of her body, and thus passing through the market place she was seen by nobody (a nemine visa) except for her very white legs. Her journey completed, she returned rejoicing to her husband, and, as he wondered at the deed, she demanded of him what she had asked. Then Earl Leofric freed the town of Coventry and its inhabitants from the said servitude, all save for horses, confirming what he had done with a charter.
Legend has it. all eyes where turned away save for one soul later famously named “Peeping Tom” whom it is said was struck blind upon gazing at his Lady’s nakedness.