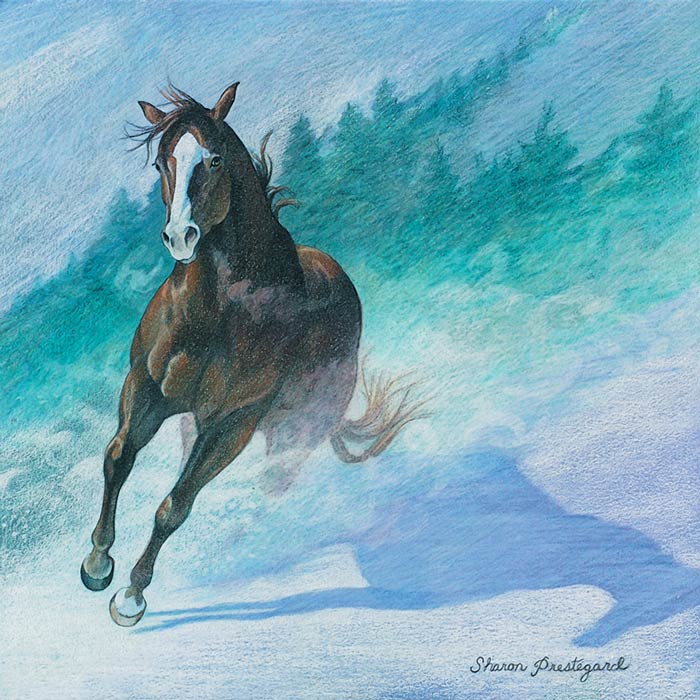 Artist Comments: When I received this panel to paint on, it brought back memories of my mare, LETTERS FROM HOME, affectionately named ‘Summer’ romping through drifts of powdery new snow after winning her World Championship in Fort Worth, Texas and returning home to Minnesota. To win the halter championship, I had her on a strict work schedule, and a daily routine of feeding, grooming and blanketing which did not allow for any free time for her. Contrary to what most owners of a world champion may have done, I put Summer out to play in the fresh cold snow with her slick and shiny summer hair coat as a reward for her efforts. I was ready with camera in hand to record the wonderful contrast. I recorded a big, powerful, horse joyfully frolicking energetically through the soft, white, pristine drifts of snow. Beautiful, serene shadows in the snow reflecting the blue of the sky were dashed by the flash of shiny hooves and a glistening red hair coat. The still cold air was broken with swirls of snow and snorts of her breath. With every fiber of her being she displayed her pleasure until steam rose from her hot body and she rolled in a deep drift to cool off. Our photo session was over. With pounding hearts,(her from playing…me from trying to keep up with her) together we walked back to the barn to scrape off the snow and dry her off.
As my memory, photoshoot and artwork demonstrate, I am often inspired by light and contrast. Light brings about contrasts in which one can see the striking difference in things being compared. Each time I start an artwork, I ask myself what the light was doing to illuminate my inspired subject, and then begin the process of showing the differences. In the process I find that the light not only illuminates the lit areas directly, but reflections of it are often found in the shadows as well.
In my own life, I have learned that there is no hiding from the one, true, light. Jesus. His light illuminates and shows the differences. And the contrasts make life very interesting!