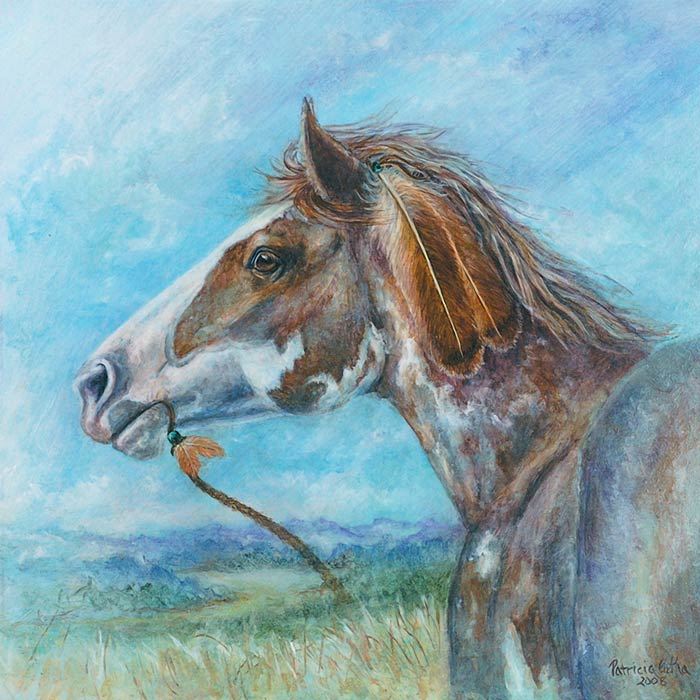 Artist Comments: In 1541 Coronado’s conquistadores observed the southern Plains Indians whose entire culture was centered around the massive herds of Bison which roamed the vast plains. When the herds moved, the Indians followed, moving their villages with the help of domesticated dogs. With the conquistadores came the Spanish horses, a strange site to the native population but one that would have a tremendous impact on their way of life. Not knowing what to call these creatures, the natives called them Big Dogs noting that the horse was a slave to man, much like the domestic dogs the Indians used to move their camps.

It is likely that the natives initially feared the four-legged animals, which carried these strange-colored men across the vast plains at great speed. Two centuries would pass before the northern plains tribes knew of the horse, notably through trade and then later through raids on enemy camps. With the horse came a new lifestyle; a new standard of living. The coveted horse became a measure of wealth and was carefully bred and kept in large herds. Used as beasts of burden or as mounts to carry brave warriors in battle or the hunt, the horse changed the lives of their masters forever.

My panel depicts a Gift Horse adorned with the feathers of a Red Tail Hawk. This horse would have been given as a gift to honor a great warrior or used to barter for breeding stock or some other commodity in a neighboring tribe.

My own mare served as a model for this painting. Her name is Sunshine.