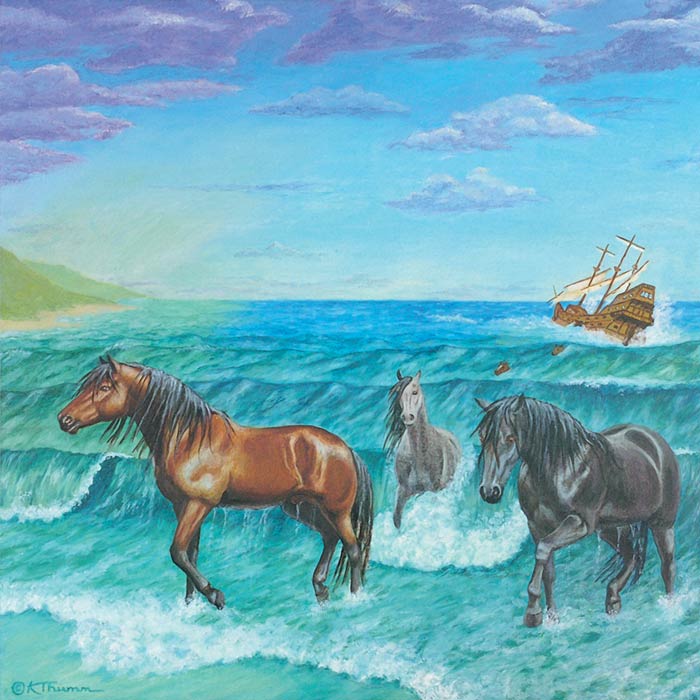 This panel was inspired by the legend of how the Chincoteague ponies came to live off the coast of Virginia on the islands of Chincoteague and Assateague and by the countless shipwrecks of long ago that might just as easily haven set free other horses who found their way to safety onshore. Five hundred years ago, a Spanish galleon was caught in a sudden storm off the eastern coast of the United States and was driven aground on a shoal. As the ship lay helpless, in sure danger of breaking apart, the crew abandoned her and the live cargo below; proud Spanish horses which were to carry the explorers on their journeys of discovery in the New World. Battered by the high waves, the hull eventually broke open in just such a way that it allowed the horses to break through their stalls and swim for their lives to the shore.
Poseidon smiled upon the horses and caused the waves to carry them safely to land. It was an exhausting swim, and as the horses emerged from the surf, sides heaving from the effort, the leader, a handsome bay stallion, paused to sniff the air, so full of unfamiliar smells. Carefully he led his new herd further onto the land where they found lush grass and fresh water and were happy to be free from the smelly, dank confines of the ship. The little herd soon felt at home in this new land and most managed to avoid recapture by the human survivors of the shipwreck. Days progressed into months and then years, and the herd grew, split up and ventured far inland. Eventually, these early herds were joined by other horses turned loose by explorers returning to the Old World in ships laden too full with treasures to include the horses. As the horses grew ever greater in numbers over the centuries, they spread across the New World from one shore to the other and were adopted by the native peoples whose lives they changed forever. Some helped to spread Western civilization across the land while others remained as wild and free as the land they first inhabited.
Poseidon, god of the seas, carried shipload after shipload of horses safely across the wide seas over the centuries to this new land. In doing so, he returned the horse to its ancestral home from which it had evolved and from which it had vanished some eleven thousand years ago.
This was Poseidon’s Gift to the New World.
Menu
Facebook-f
Instagram
Youtube
Twitter
Copyright 2021 © All rights Reserved. Mural Mosaic Inc