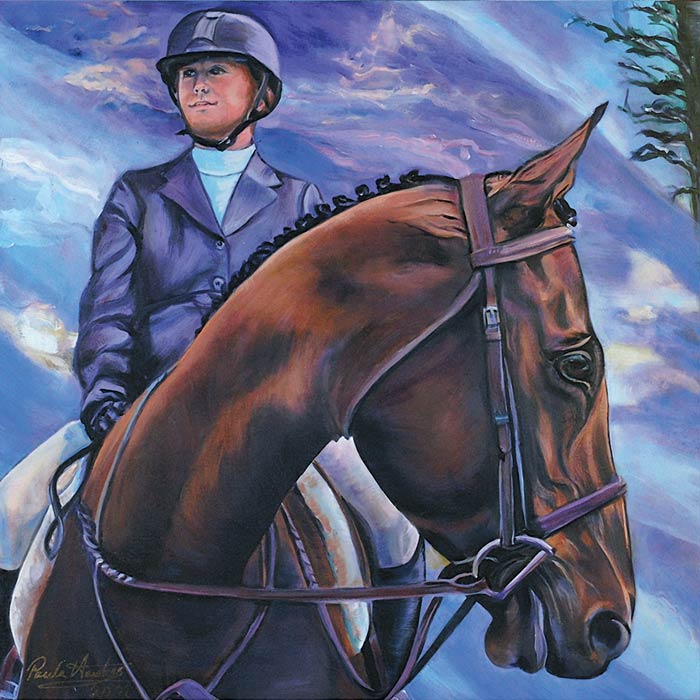 I started painting after being around horses. They have changed my life after getting to know and love them. Then one day I decided I had to learn to paint so I could paint horses. From there I started to paint portraits as well. My love for horses continues. It is my passion. So when I had the opportunity to join in the mural mosaic project, I jumped at it.
I wanted to paint our horse King’s Ransom with my daughter as we spend a lot of time at the stables and at horse shows. He is a thoroughbred and a hunter show jumper. When I got my mosaic panel it had a blue-purple base, so to keep to the same colors I thought that a “Chinook” background would be good (we live in Calgary and we get a lot of Chinook skies).
Here is a brief history of show jumping, which I thought you might find interesting.
Show jumping is a relatively new equestrian sport. Until the Enclosures Act in England in the nineteenth century there was no need for a horse to jump fences as there were none! The Enclosures Act brought fencing and boundaries to many parts of the country as common ground was parceled out amongst wealthy landowners. This meant that those wishing to pursue horse riding now needed horses that were capable of jumping.
The early shows were held in France (circa 1866). There was a parade of competitors who then took off across country for the jumping. Soon after, fences began to appear in the show arena (this became known as “lepping”). Fifteen years later “lepping” competitions were brought to England and by 1900 most important horse shows had “lepping” classes. The ladies still rode sidesaddle and had their own classes! Today, show jumping has come a long way – courses are now highly technical, requiring boldness, power, accuracy and control from both horse and rider.
The first big show jumping class to be held in England was at the Horse of the Year Show at Olympia in 1907. Before 1907 there were no penalties for a refusal and the competitors were sometimes asked to miss the fence to please the spectators! Show Jumping was introduced to the Olympic games in 1912. Harshly difficult courses used to be a hallmark of the competition. At the 1948 London Games, Mexico won a surprise gold simply because no other team finished! At the 1932 Los Angeles Games, no team medals were awarded at all, because no team finished! Canada sent its first equestrian team to the Olympics in 1952, and has won two Olympic show jumping medals – a gold medal at the 1968 Games in Mexico City and a silver medal at the 1976 Games in Montreal. Canada will fielding three teams in Beijing, the first time a full Canadian squad will compete in equestrian in 12 years. England will host the next Olympics in London in 2012.
Menu
Facebook-f Instagram Youtube Twitter
Copyright 2022 © All rights Reserved. Mural Mosaic Inc