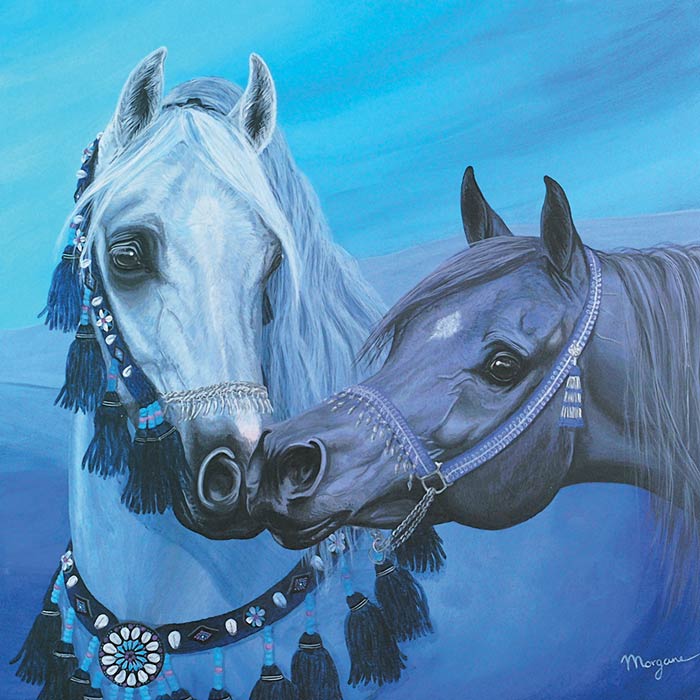 Centuries ago, somewhere in the inhospitable deserts of the Middle East, a breed came into being that would influence the equine world beyond all imagination, the Arabian. This war horse established himself as a necessity for survival of the Bedouin people and was considered a gift from god to be revered and cherished. Back then, a man’s wealth was measured in his holdings of these fine animals…
Races were held with the winner receiving the best of the losers herd as their prize. Breeding stock could be bought and sold, but as a rule, the war mares carried no price. No greater gift could be given than an Arabian mare. Their daughters were sought after by the most powerful Kings but often remained unattainable. Daughters and granddaughters of these fabled mares changed hands through theft, bribery and deceit. If any of their descendants were sold, the prices were legendary. They were often richly harnessed with colorful halters and collars covered with dazzling beads and precious stones as a display of their extreme value.
Over the centuries, the Bedouin tribes zealously maintained the purity of the breed and their extremely selective practices eventually helped the Arabian become a prized possession – desert jewels – throughout the world
Menu
Facebook-f Instagram Youtube Twitter
Copyright 2021 © All rights Reserved. Mural Mosaic Inc