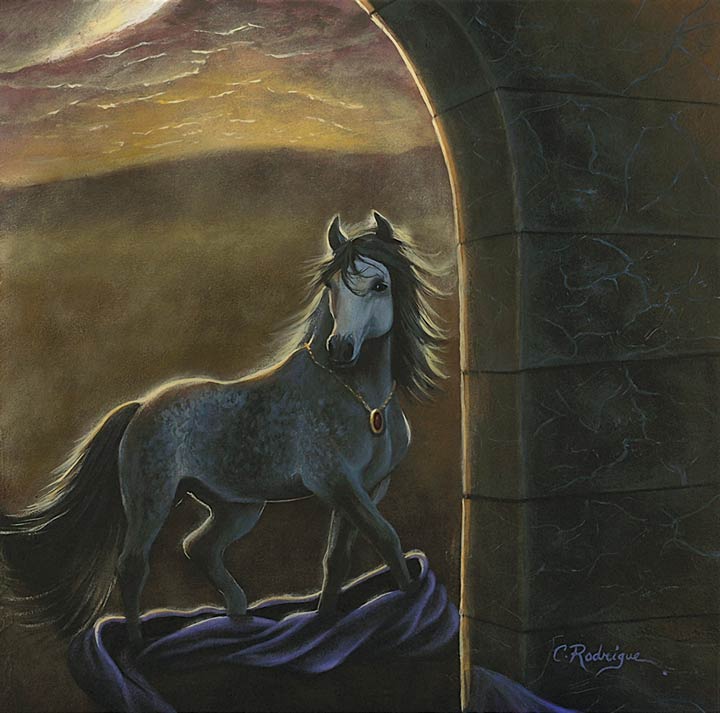 The Roman Emperor, Caligula, was said to be quite mad and his eccentricities were historically noted. One of these eccentricities was his love for his horse, Incitatus.
Caligula loved this horse so much that it is rumoured that Incitatus was made senator, and dignitaries were made to dine with the horse. Caligula apparently believed his horse to be a combination of gods, therefore the horse itself being a supreme god to be worshipped and adored by all. This beloved horse slept in a black marble stable, and even had a wife of his own, Penelope. Among the many ways Caligula indulged himself in treating his horse like king, he also adorned Incitatus with a jewelled necklace and purple blanket.
I’ve imagined Incitatus as a horse not knowing or understanding his status, but rather just being a horse. This inspired me to paint this famous historical horse showing a rebellious nature, turning away from the pomp and ceremony, mane wildly blowing in the wind, stomping on his purple blanket. In the end, Incitatus, the obsession of a great Emperor, was but a horse, wanting the simple things of a horse.
Menu
Facebook-f Instagram Youtube Twitter
Copyright 2022 © All rights Reserved. Mural Mosaic Inc