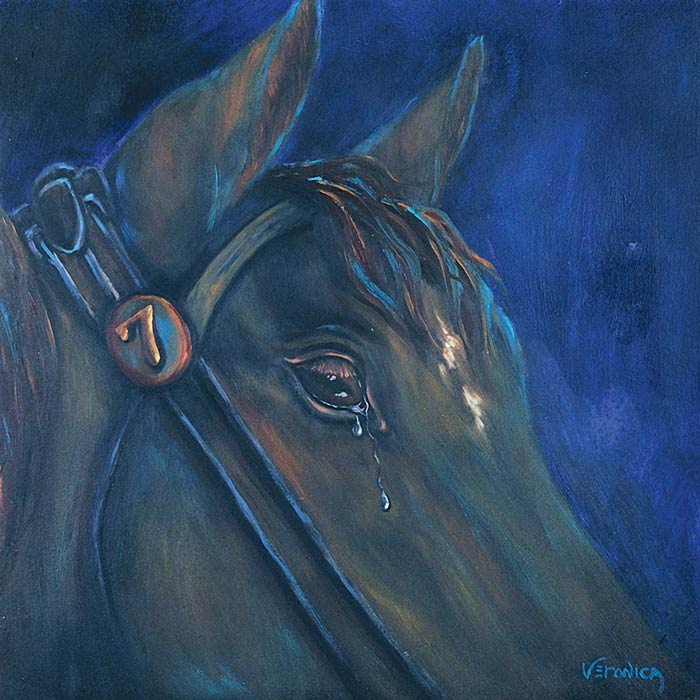 “Commanche was the only surviver with Custer’s party at the Battle of Little Big Horn. He was the mount of Captain Myles W. Keogh, commander, Company I, 7th Cavalry. Commanche suffered seven wounds from the battle, three severe wounds and four flesh wounds. When found he was said to have been “down on his haunches” but called to the troops and horses that came to “clean up” from the battle. Private James Severs, Company M, 7th Calvary was credited with finding Commanche on the battlefield.
Commanche was retired from service on April 10, 1878. On that day, General Order No. 7 written by, E.A. Garlington, 1st Lieutenant and Adjutant, 7th U.S. Cavalry By Command of Colonel Sturgis, “The horse known as “Comanche” being the only living representative of the bloody tragedy of the Little Big Horn, Montana, June 25, 1876, his kind treatment and comfort should be a matter of special pride and solicitude on the part of the 7th Cavalry, to the end that his life may be prolonged to the utmost limit. Though wounded and scarred, his very silence speaks in terms more eloquent than words of the desperate struggle against overwhelming odds of the hopeless conflict, and heroic manner in which all went down that day.”
Commanche served as the regimental mascot for the 7th Calvary, I Troop and accompanied the regiment until his death at Fort Riley, Kansas on November 9, 1891. His remains were mounted for exhibition by Professor Lewis Dyche, for display at the 1893 Chicago Worlds Fair and now reside in the museum at the University of Kansas in Lawrence, Kansas.
I have been around horses all of my life, I truly believe they are capable of emotions and feelings, they just show it in ways most humans wouldn’t understand. Most learn to trust and care for their “owner” and so the saying goes, “would walk through fire” for them. They show trust and friendship by greeting their owners with a nicker when they see them, doing what they’re asked, even if they’re nervous or unsure…..going that extra mile. I’m sure Commanche was no different, he had his “friends” in the regiment, both equine and human. Can you imagine the chaos of the battle as seen through his eyes? The horror of seeing your “friends” going down one by one? What were his thoughts? Were they survival alone or were they mixed with sympathy for the dieing, despair and mourning over the lost? Only Commanche could answer that, but I think that it was all of the above and that is why I chose to portray him with tears….tears for his fallen friends of the 7th Calvary
Menu
Facebook-f
Instagram
Youtube
Twitter
Copyright 2021 © All rights Reserved. Mural Mosaic Inc