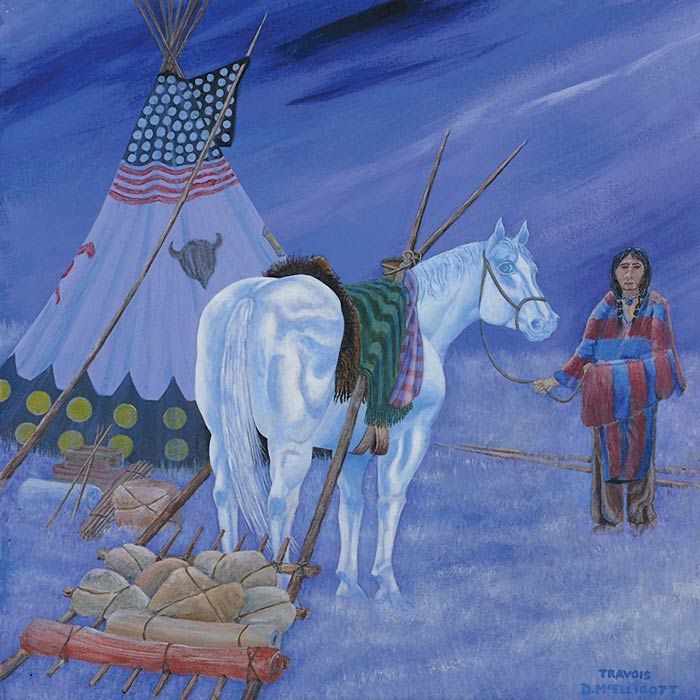 The travois was a frame used by Plains Indians of North America to drag loads over land. It was the principle means of transporting household goods, the teepee cover and equipment, small children and old, sick or injured people. Plains Indians were nomads moving from place to place hunting the bison herds which roamed the vast plains. They had to carry everything they owned with every move. They also used the travois when traveling to and from trading camps where horses were used as gifts when trading with other tribes as well as rewards to tribe members.
A powerful, muscular horse was needed by these nomads, which is the reason I emphasized the strong hind quarters and muscular neck in this image.
Although considered more primitive than wheel-based forms of transport, on the type of territory where the travois was used (forest floors, soft soil, snow, etc) rather than roadways, wheels would encounter difficulties which made them a less efficient option. As such, they found use in New France’s fur trade by Coureurs Des Bois, who traded notably with the Plains tribes.
A strong powerful horse was essential to the Plains Indians and an important part of our Canadian history.
Menu
Facebook-f Instagram Youtube Twitter
Copyright 2022 © All rights Reserved. Mural Mosaic Inc