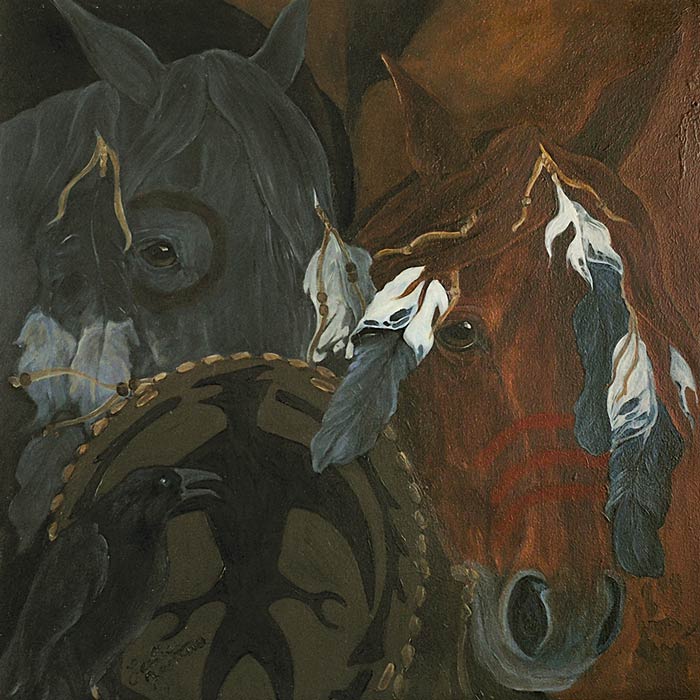 The theme for my panel is Sitting Bull’s horses, Blackie and Bloated Jaw. I did quite a bit of research trying to find out about his horses. I read two biographies, searched endlessly on the web and all I could find was reference to an impressive black stallion someone gave him and a sorrell named Bloated Jaw. But Bloated Jaw, also known as Lump on the Jaw was
considered his favorite and fastest mount. He was a sorrel he had taken from a white man in 1858. Bloated Jaw was extremely fast and handy in battle and in the buffalo hunt and wore the eagle feathers of a good war pony in his forelock. After further research I found that the Nokota mustangs of North Dakota, trace their lineage back to Sitting Bull’s horses. The shield in the panel is a representation of Sitting Bull’s shield. The image on it was given to his father, Jumping Bull in a vision. The shield was passed down after his death and there are actual drawings of Sitting Bull riding one of his ponies into battle, carrying this shield. Sitting Bull was a Medicine Man, a peace loving, family family who was considered one of the greatest chiefs of the Sioux. He was a Hunkpapa Sioux who wanted to keep his people’s land for his people to survive on. He was not war hungry for the sake of war with the white man. The Black Hills was a sacred place for the Sioux, the white man wanted it for the gold and the land. The story is long and heartbreaking with many deaths on both sides.
Horses were woven into the culture of the Native Americans by the 1800’s. In the native tradition, the horse was revered as a sacred being and honored for the personal power it brought to the lives of the people. Their horses needed to be as brave and fierce as their riders, both in battle and in the dangerous buffalo hunts. Any horseperson knows the value of a trusted mount in tense situations. Lives can be easily lost and many good horses have risked thier own lives to take care of their riders. One can only imagine what it was like to ride a fast horse in the midst of thousands of running buffalo. No saddle, only a thin slice of hide for a rein, with a bow and arrow in your hands. That in itself is a gift, to experience the oneness of horse and man, riding with the wind, both in trust with each other.
Menu
Facebook-f
Instagram
Youtube
Twitter
Copyright 2021 © All rights Reserved. Mural Mosaic Inc