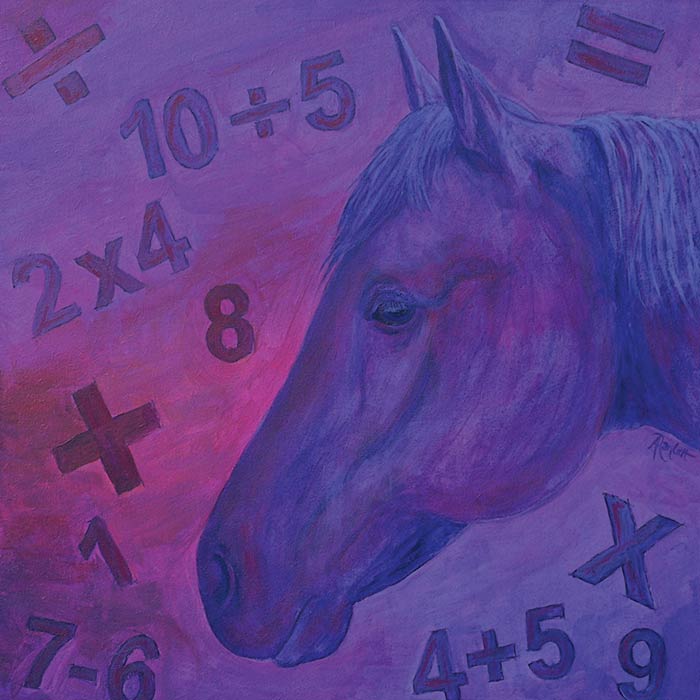 Clever Hans, a black Arab stallion, was owned and exhibited by Wilhelm Von Osten in Germany in the late 1800s and early 1900s. Von Osten believed that animals had greater intelligence and reasoning skills than previously thought. He taught Clever Hans to tap out the answers to math problems with his hoof and this amazing horse thrilled audiences with his skill. Upon further investigation, it was determined that Hans was not really so much clever as he was very, very observant! He would watch Von Osten for subtle, subconscious clues that he had gotten the answer right and then stop tapping his hoof.
The only photos of Clever Hans I could find were old, grainy and not very helpful, other than to show he was a black horse. Although Hans was an Arab stallion, in the photos he didn’t appear to have what I consider to be a “classic” Arab appearance. As he was fairly non-descript and the photos weren’t of much use, I decided to use my Quarter Horse mare, Bess for reference. I chose to focus on Clever Hans’ head and surround it with numbers and mathematical symbols to create a piece with a bit of whimsy.
Menu
Facebook-f Instagram Youtube Twitter
Copyright 2022 © All rights Reserved. Mural Mosaic Inc