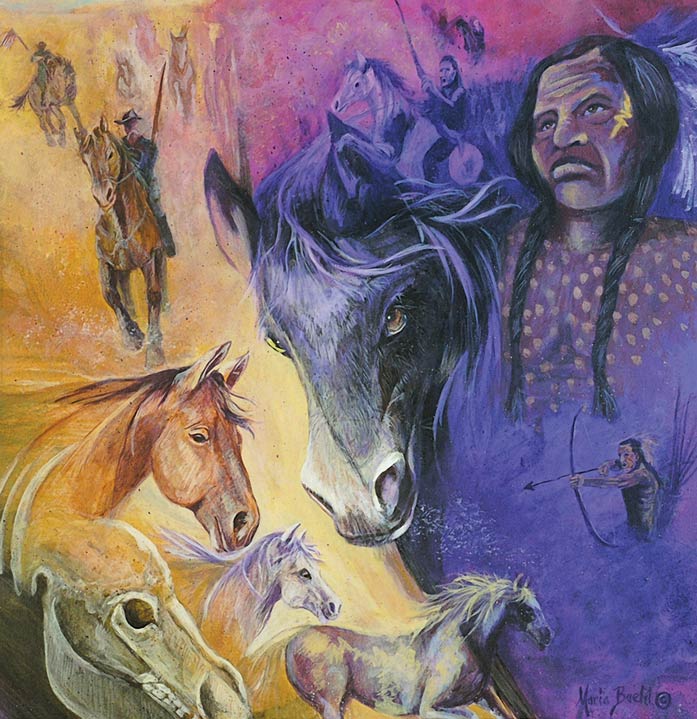 Crazy Horse or (in Lakota Cha-O-Ha means he was one with nature) was born in 1840 the Black Hills South Dakota.
He was recognized by his face paint, a yellow lightning strike down the left side of his face, a facial scar on the same side from a bullet, no make up on his forehead and no war bonnet but a single hawk tail feather in his hair. White powder painted with finger prints resembled hailstones over his body and a red blanket folded over his right arm.
Crazy Horse rode a black and white paint he named ‘Inyan’ meaning rock or stone. He became a fine horseman during buffalo hunts acquiring skills that would be refined during battles he faced later on in his short life of 37 years. Chief of the Oglala-Brule Sioux he was celebrated for his ferocity and courage during battles against and their enemies: the Crow, Shoshone, Pawnee, Blackfeet and Arikara. He was recognized amongst his people as a leader committed to preserving the Lakota traditions and values of life. The encroachment of white-men in 1876 and several battles over territory between the American Government and Native American Indian bands onto reservations brought about much resistance. Chief Crazy Horse led a resistance force of 1200 Oglala and Cheyenne to help defeat Custer’s Seventh Cavalry over the Battle of Little Big Horn on June 25 and 26 1876. The Battle of Wolf Mountain on January 8, 1877 between the United States Cavalry and his warriors was his last major battle. With the buffalo diminishing in numbers and cold climate affecting his people; Crazy Horse and other northern Oglala leaders had surrendered to the Red Cloud Agency, Fort Robinson, Nebraska on May 5 that year.
Crazy Horse was held in a struggle in front of the guard house at the Fort; stabbed and bayoneted he died that day September 5, 1877. The great Chief Crazy Horse body was turned over to his relatives and laid to rest near Wounded Knee, South Dakota as his elderly father sang a death song over him. His song a tribute to his bravery is still sung today and is said to be a protector to his people.
A few years ago, I had the chance to stand, walk and view the fields of Little Big Horn during a heated summer day. The experience enriched my appreciation for the battle and the lives that were lost that day. My painting (panel 166) entitled “Hoka Hey! It’s a good day to die, Brave up brother” is my tribute to the lives lost; the legends born of many great men/women that day and to the legend surrounding Chief Crazy Horse.
Menu
Facebook-f Instagram Youtube Twitter
Copyright 2021 © All rights Reserved. Mural Mosaic Inc