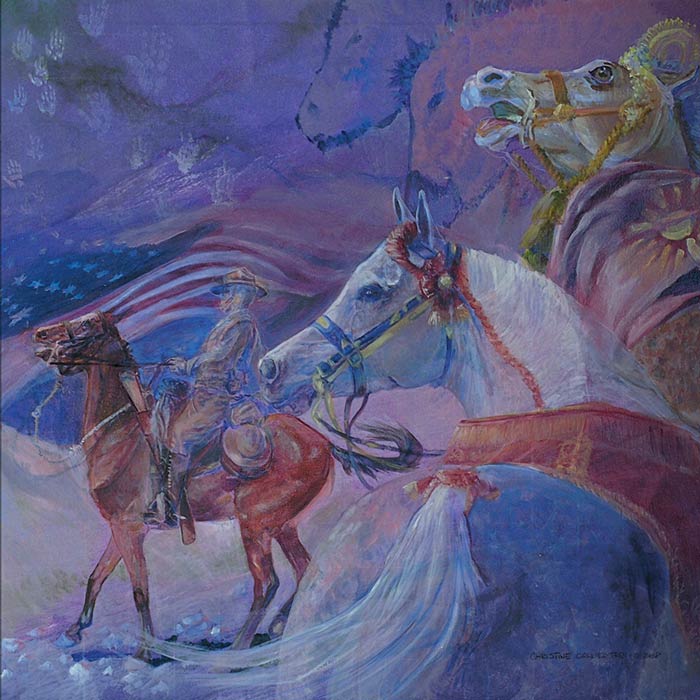 I started doing an Evolution series years ago when I first saw the publicized images of the horses in Chauvet-Pont-d’Arc Cave. In Evolution, I am trying to show the connection through the centuries between art and horses. Beginning with the Chauvet cave paintings, I was intrigued by how such primitive artist materials were so eloquent in expressing the nature and spirit of the horse. I have used several techniques to express this series, including sculpture. This journey isn’t over yet.
The opportunity to participate in the Mural Mosaic project was exciting. I was immediately inspired when my panel arrived and I could see that it would lend itself to my Evolution series. With the list of war horses provided on the mural site, I chose the ones that excited me and started my research. My theme was to start with the cave horses and travel through great civilizations that connected with great war horses. I chose Bucephalus, Marengo, and the US cavalry remount of the 20th century.
On the far right is Bucephalus, the horse of Alexander the Great. Alexander loved this firey horse so much that a city was named in his honor. Bucephalus has the war banner of Alexander wrapped against his neck.
The big grey is my interpretation of Marengo. According to my research, Napoleon rode grey arabs mostly. But there are no records of a horse called Marengo. Napoleon was known for giving nicknames, so it is probable that after his major victory in Marengo, he started calling his horse of the moment by that nickname. My version of Marengo is a well fed, well rested mount dressed in review finery. I used the excellent paintings of Lucien Rousselot for research of equipment.
On the far left is a US cavalry remount from the early 20th century. This period was the final age of equestrian cavalry in the United States. The most famous remount of my lifetime was Black Jack, who was televised during the funeral march for President John Kennedy. I have deliberately omitted the brands that would have been on the left shoulder and neck, only because I felt that they would have become distracting.
Fading back into the cave wall is Old Glory. The stars become petrograph handprints put there by an early civilization in the United States. A statement that “We were here”.
There are lots of interpretations that can be extrapolated from this painting. But honestly, when I composed it and painted it, there was no hidden adgenda or message. I encourage you to let your imagination wander as you look at the images of great horses that were a part of great civilizations.
Menu
Facebook-f Instagram Youtube Twitter
Copyright 2021 © All rights Reserved. Mural Mosaic Inc