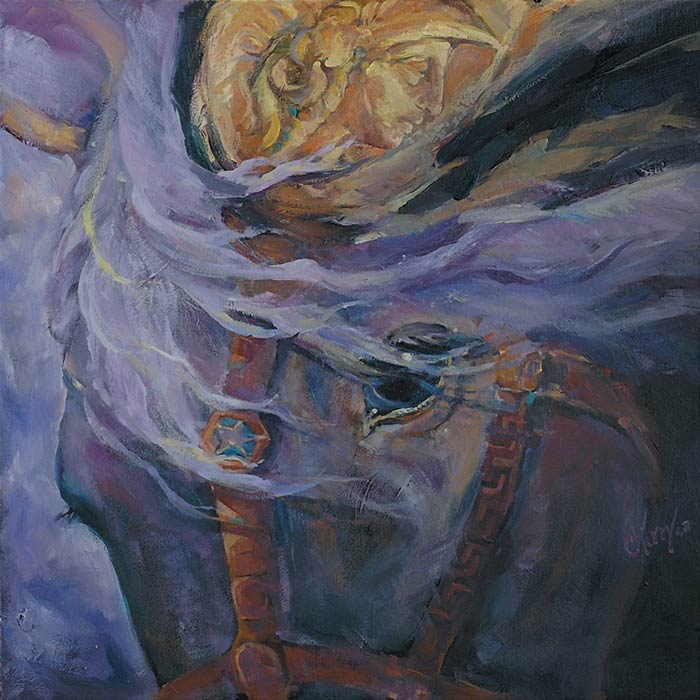 For this mural mosaic, I chose to depict Alexander the Great’s impressive horse, Bucephalus. It was an ultimate choice for me, since I have dedicated a series of my art to the endangered. Greek horses from the island of Skyros. Only recently, their bloodline has been traced back to the battle horses used by Alexander Great in the 300s BC. For me, to paint this momentous leader of men and horses has been both an honor and natural course. While keeping within the artistic guidelines of the Mural Mosaic project, have added some emblematic imagery to illustrate the life of Bucephalus.
Can you decipher the five implied symbols?

HINTS: Throughout history, few horses have impressed the Equine heritage like Bucephalus.
Described as being afraid of his own shadow and defiantly wild, his stunning dark horse was distinguished by a large star on his forehead and one indigo eye.
Legend tells us how in 344 BC, a 12-year-old Alexander the Great won the horse over a taming wager with his father, King Philip II.
Alexander turned the horse away so that the horse did not see its own shadow, which seemed to distress it.
He spoke soothingly and so tamed the horse, in the manner of a Horse Whisperer
Like his hero and ancestor Achillis, Alexander viewed his horse as immortal and superior to all others.
When the mighty stallion died of battle wounds in 326 B.C. Alexander founded the city of Bucephala, (thought to be the modern town of Jhelum, Pakistan) thus sealing the celebrated horses honor.

Did you find them? More hints & answers: