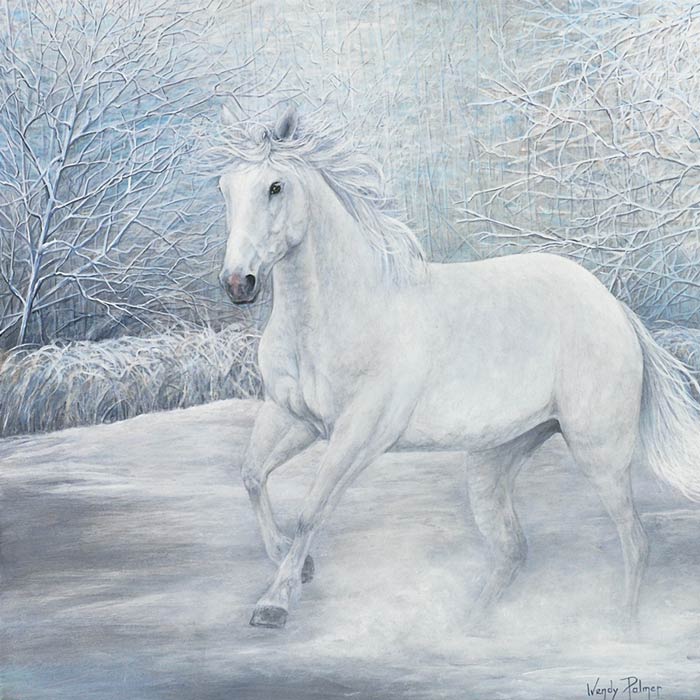 Cloud the Wild Stallion of the Rockies
When I first received my Mural Mosaic panel of blue and white tones, I instantly thought of a white horse, and my love of wild horses brought to mind a documentary I had seen about a pale palomino, wild horse stallion by the name of Cloud. Driving around Southern Alberta, I have occasionally seen some wild horse bands, and am always fascinated by their free and playful spirits. This painting of Cloud is dedicated to the preservation of wild horses for Cloud’s herd in the Arrowhead Mountains and for wild horses all over North America.
When Emmy Award-winning filmmaker Ginger Kathrens recorded a tottering newborn wild foal, she hardly anticipated how he would change her life. She named the pale colt Cloud. Cloud was born on May 29, 1995 in the Pryor Mountains of Montana, a range the Crow Indians call the Arrowheads. He is the son of the striking black stallion, Raven, and a golden palomino mare. Cloud was different from the other colts – daring and outgoing and keenly observant, his precocious personality kept his siblings on edge. At two years of age, Cloud left the band as a feisty adolescent to begin his bachelorhood. Cloud is a strong stallion who is unique, daring and resilient. He joined up with a group of other stallion bachelors, living free in the wild land.
From lightning strikes in the summer to the brutally punishing assaults of a Northern Rockies winter, and attacks on the young by mountain lions, the wild can be a harsh environment for these creatures. Further complicating their existence, are the often controversial policies of the federal Bureau of Land Management, especially its helicopter-guided roundups aimed at keeping wild horse populations low. In 1997 one such roundup was recorded on film for this program by Ms. Kathrens, who, to her dismay, witnessed the capture of Cloud himself. But because of his unusual light color, Cloud was released. Cloud was the only captured bachelor to be given back his freedom that year.
As Cloud matured into a young band stallion, family means everything to these wild horses as a means of survival and companionship. As the leader, Cloud fights to hold his family together, battles other stallions, and endures lightning storms, brutal winters, lethal predators, more government round-ups and a raging wildfire. Two sons dominate Cloud’s story, one is not Cloud’s by blood but will be raised by him. The other is Cloud’s spitting image but will never know him as a father. This son is named Bolder.
“Cloud is the most compelling and charismatic wild animal I’ve had the opportunity to film,” says Ms. Kathrens. “But, covering his life on film has been a nerve wracking experience. I’m always relieved to get back up on the mountain and find he has survived another season.”
Ms. Kathrens hopes her film will help in that regard. “By getting to know Cloud and his family, perhaps we can all better appreciate and value our wild horses as a remarkable Native American wildlife species.”
For more information on Cloud and his herd, please visit The Cloud Foundation at: http://www.thecloudfoundation.org/home.html
Menu
Facebook-f Instagram Youtube Twitter
Copyright 2022 © All rights Reserved. Mural Mosaic Inc